Context: This blog is an amalgamation and update of two previous Facebook posts. I was in Orlando, Florida on the day of the Orlando Pulse nightclub terrorist attack, but not involved. I did not want the posts to be lost in the firehose of social media.

I’ve only ever once experienced direct homophobia

When I was at university I was walking along the seafront one evening, hand-in-hand with boyfriend-du-jour. We passed a group of three lads, who went stony silent as they passed us. They waited until we were about 30 metres away before one of them yelled “QUEER BOYS!” at us. How original.

I was furious. University was my fresh start with my sexuality and I had always been open about it since arriving, having hidden it at Sixth Form (where I experienced indirect homophobia, almost always through ignorance rather than anything else), and this cunt violated that.

I started to run towards the one who I knew yelled it, the one with the biggest grin on his face. He broke away from his two friends and I chased him into the town. I caught up with him and I threw him to the ground. He put his arms up and said he was sorry and begged me to leave him alone, having very clearly underestimated me (bear in mind I was nowhere near as physically strong then as I am now). Which I did, after telling him what I thought of him at the top of my voice and instructed him in rather frank terms never to do such a thing again.

Why did I do this? Because what he did, even though it did not cause me or boyfriend any physical harm, was NOT FUCKING ACCEPTABLE, and I was not going to let him get away with it. I hope he never did it again and always thought twice about such idiocy and ignorance after that night.

(In hindsight it was a pretty stupid idea to abandon the boyfriend with the other two, but nothing else happened, I just have to chalk that one up to seeing red.)

Since then, some 20 years on, I have never suffered any sort of homophobic abuse. There are a couple of advantageous factors which have contributed to this, the first being that I “don’t look gay” (whatever that means) and the second being that I have lived in major cities for the majority of my years since university, which are generally considered to be safer for gay people.

But I realise that I am very lucky, and I also realise that it could happen to me, someone close to me or just any other gay person, known or unknown to me at any time. It scares me, and it isn’t right, and I still DO NOT FUCKING ACCEPT IT.

The attack in Orlando on 12th June was deliberately targeted at gay people. Again, it did not affect me directly. The reality is because I’m 40 and don’t go to nightclubs any more it would have never had a chance of affecting me personally. But it did affect 103 people with whom I share community, nearly half of which are now dead. And that is not fucking acceptable.

This will happen again if we don’t start to stand up to the plague of hate that we are suffering at the hands of extremists. This has nothing to do with guns, this was a hate attack, plain and simple, and it could have happened anywhere. I am sick of reading in the news about the plight of gay people in Muslim countries, and now not even that is good enough; now gay people in western countries are being targeted for public massacre. That is not fucking acceptable, and we cannot ignore it or make excuses for it.

Nobody should be in the least bit comfortable about what happened on that day and nobody should ever forget it. Homophobia in any form and from any source is never justifiable. This direct attack on our community, solidarity, hard-earned freedoms, rights, culture and way of life is way over the line, and we need to stand up to it and say that we will not fucking accept this bullshit any longer, regardless of who we may upset in the process.

When I came out to my parents, I told them I was frightened about what might happen to me because I’m gay. That fear upset them, especially my Mum. She’s long gone now, but it turns out that her upset wasn’t without merit. I need to show her that I’m not frightened, and I won’t fucking accept this.

I’m tired, it’s been a stressful day and I’ve been through a wide range of negative emotions, from anger and rage to frustration, disbelief, disgust, shock and of course grief and sadness. Thank you to all those who reached out to me today, it’s been very touching and it meant a lot to me, especially those whose care I arguably do not deserve.

Here’s the Orlando Eye, photographed the day after the attack. Many other buildings around the world were lit up in the rainbow colours in its wake. 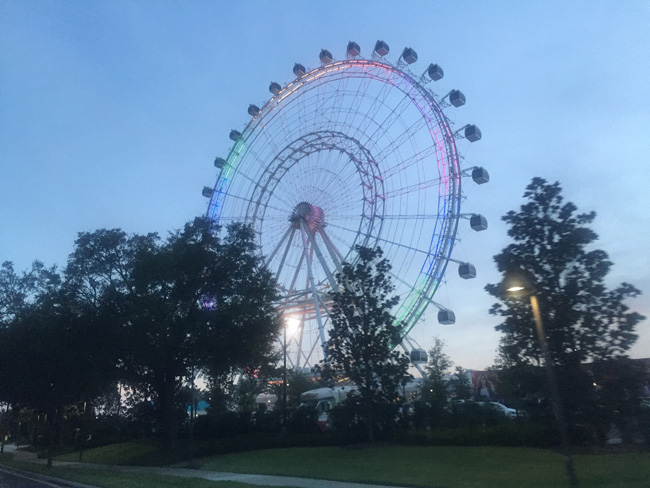 This could have happened to any of us

A man from Illinois makes white crosses for every victim after a mass shooting in the United States. Now it’s Orlando’s turn. He’s made 49 white crosses and drove 1,200 miles to Orlando Health Medical Centre, just a couple of blocks from Pulse nightclub. Most of the victims were taken to this hospital.

I went there one week after the atrocity against gay people in Orlando to see these beautiful crosses and to pay my respects to the victims. It’s the least I could do.

People were solemn, people were silent, people were private in their respect and grief. I watched an elderly Japanese man bow to every single one of the 49 crosses. All I could hear was the water from the waterfall and the wind in the trees. There was no traffic to speak of because of the road closures still in place.

I wrote on one of the crosses, that of Alejandro Martinez, who was only just born at the time I was coming out at university. The man from Illinois will, after a while, deliver each of the crosses to their respective families.

Rest in peace, my 49 brothers and sisters. 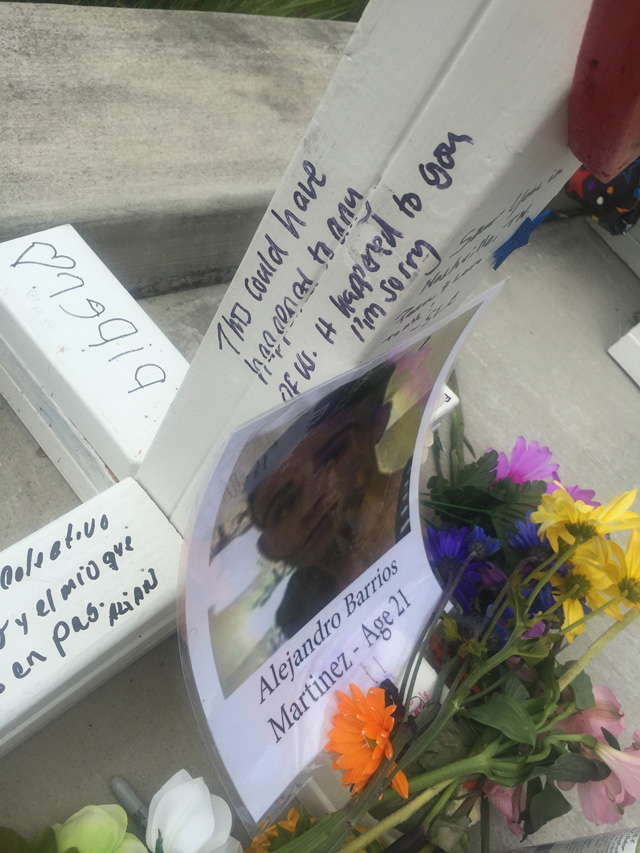 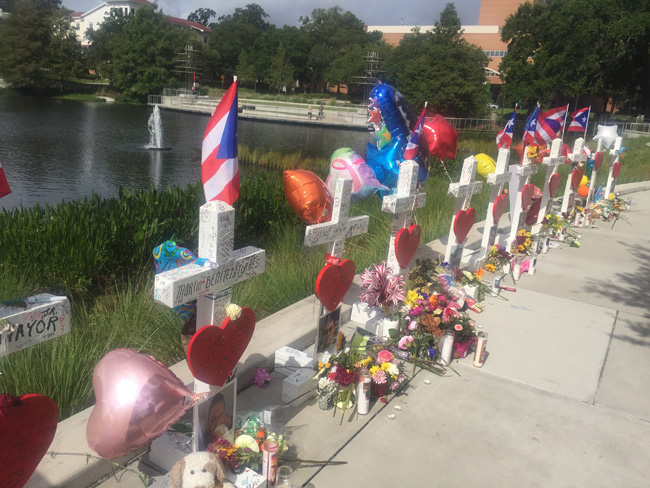 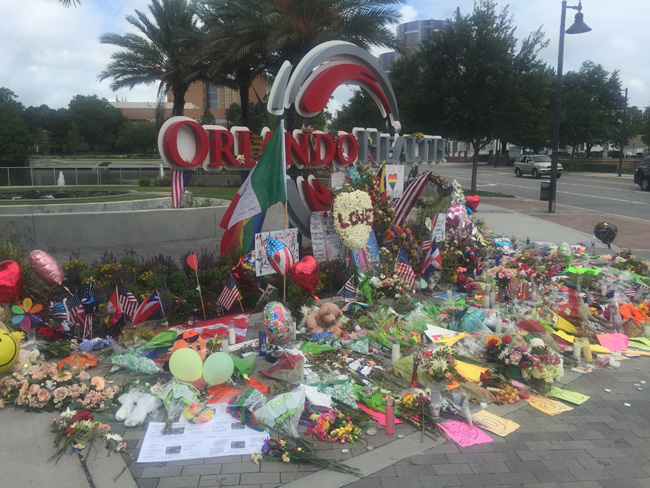 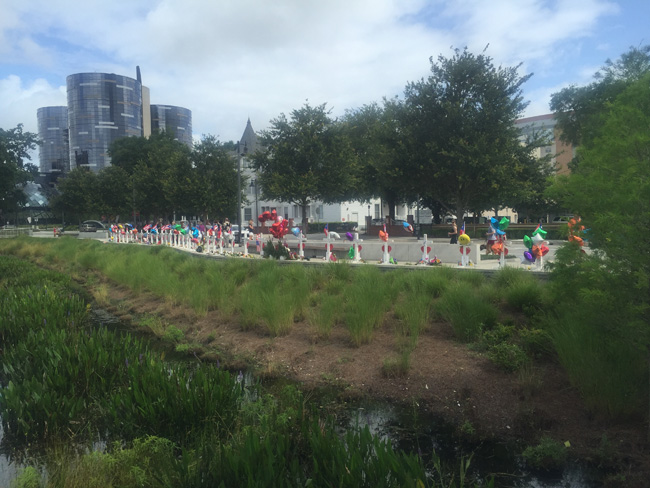 Do you believe in angels?

I’m by no means a religious person whatsoever, I’m a scientist through and through. All I can process is 1s and 0s. However, I do believe in spirits. I lost my Mum 8 years ago to cancer and, although I’ve not been able to conclusively prove it, I do believe her spirit lives on, mainly in my cat, with whom I’m so in tune with and who looks after when when I’m upset and herself should have succumbed to a fatal illness when she was a kitten, but survived it. The vet couldn’t explain it. The logical side of me would like to chalk it up to a freak recovery (because they do happen), but the human side of me wants to believe that someone else had something to do with it, because she could see that I was somewhat struggling without her. I still am to a certain extent, but I don’t think that’ll ever completely end.

Decided to give Formspring a go. I will answer most questions but if you want to insult me then please do it to my face.

If you had to shoot one person, who would it be and why?

It’s going to have to be The Pope. Il Papa sprang to mind immediately, I tried to think of others, but they were always trumped by him.

That man and his wretched organisation is responsible for more misery and poverty on this planet than any other in history and it needs to fucking stop. It needs to drag itself into the last century, let alone the present one. It simply isn’t on any more.

They had a fantastic opportunity when JPII died to modernise with a more progressive Pope, but no, they took a bad situation and managed to make it *even worse*. I was very (and genuinely) disappointed with this and frankly so should be all followers of the Catholic faith.

Decided to give Formspring a go. I will answer most questions but if you want to insult me then please do it to my face.