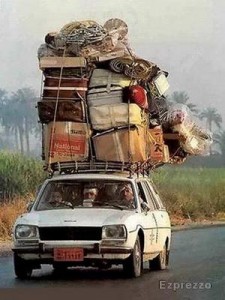 For the third time in as many years I am moving house. I’m not moving far, just to another apartment in the same building, so it’s not a full blown affair with packing boxes and a rented van, just one flight of stairs (or the lift for the heavier items).

I’m moving in with my friend Chris and renting out my apartment to another friend. This move is designed to help me reduce my living costs for the next couple of years as I prepare for university, study at university and then decide what I want to do once I’ve graduated next year. This is all assuming of course that I get accepted on the course, I’ve not yet finalised my application because I’m waiting on an academic reference to come through from my previous university.

There’s going to be a bit of a period of adjustment because I’m used to living on my own and both Chris and I seem to have rather a lot of stuff, which needs to be thinned out if it’s going to fit in the apartment, despite the fact that it’s 50% larger than mine! It’ll be another change for my cat too, but she seems to be quite adept at moving house as this too will be her third time in as many years and she didn’t seem to mind too much last time.

So there you are. I will keep you posted as to how things go with everything. 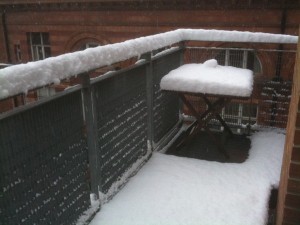 Manchester (and the rest of the north of England) received a record breaking snow dump last night, the likes of which I’ve never seen in Manchester and not seen since my childhood. It started around 11.00pm last night and by 1.00am when I went to bed about an inch had fell, which is extraordinary enough for the city centre, but when I woke up this morning it had apparently been snowing all night and there was around 7-8 inches on the ground.

I went into town to go to the post office and the bank and it was a like a ghost town, hardly anybody had bothered to come in to work. There was hardly any traffic and hardly anyone walking around. Snow was piled up on the pavements, it was like Whistler (ski resort). I walked past Albert Square where the council were dismantling the town hall’s Christmas installations, and they had taken the large Santa model down from the building and placed him on the ground, where he looked a bit crestfallen all covered in snow, as if to say “well it’s a bit late now!”. 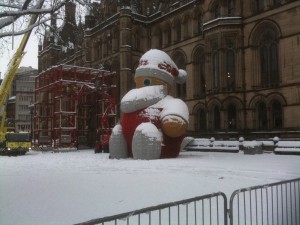 The midlands and the south are going to to be hit later today and overnight. There’s no more snow forecast for the north west for the time being, but of course it’ll freeze overnight and it’s going to remain cold so the already fallen snow isn’t going to go anywhere in a hurry. Truly extraordinary. Global warming? What global warming. We’re having cold winters and persistently shit summers. Show me the global warming!

I’m just glad that I don’t have to travel anywhere this week!