Now, let me blind you with statistics. Let’s first of all discuss this “will of the people” thing. While it is true that, by a whisker, Labour won the greatest proportion of the votes (35.2%), consider the following: 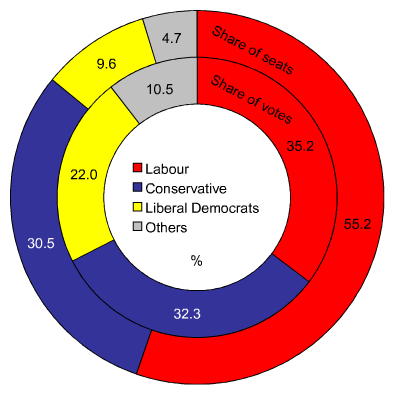 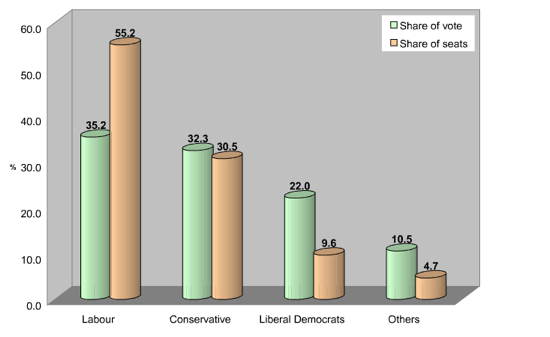 Exactly how can a system be fair when it can allow a party to gain 24.7% extra seats with only 2.9% extra votes over the next most popular party? How the fuck does that work? I’m not saying that the Tories deserved to win, indeed their proportion of seats is very close to their proportion of the vote, so the system obviously works in their case, but look at the Liberal Democrats: 22% of votes were cast for them, yet they only get 9.6% of the seats. Their votes-to-seat ratio (in terms of percentage) is 2.29, yet Labour’s is 0.63, which means that the Libdems apparently had to work 3.7 times harder to win seats than Labour did.

Seriously, don’t talk to me about “democracy” and “winning fair and square”. There’s nothing democratic, fair or square about this whatsoever. As I’ve said before, don’t ask me to come up with a foolproof alternative, because I don’t have one and as I’m not a politician it’s frankly not my job to do so. But that doesn’t mean that I, as a voter, am not allowed to voice my great dissatisfaction with this so called “democracy”. Indeed, if the UK was a tin-pot sandy country in the Middle East, George Bush would have probably come and enacted regime change by now since the makeup of the government most certainly does NOT reflect the will of the people.