Brown ‘listening and learning’ as PM

BBC NEWS | Politics | Brown admits ‘mistakes’ over tax – this is totally enraging, our unelected Prime Minister is apparently a trainee:

But Mr Brown said he was “listening” and “learning” as prime minister and that problems were “being dealt with”.

No, I’m sorry, I don’t accept this. Gordon Brown is the Prime Fucking Minister of this country, he is supposed to be an expert on these things, he’s supposed to have learnt, not still be learning. Who will take responsibility for his mistakes? There is nobody to supervise him, there is nobody who is supposed to know more than him. When and how is this ongoing, unstoppable incompetence going to end?

BBC NEWS | Politics | No-one thinks Mugabe won – Brown – I’m quite frankly astonished at the sheer bare-faced cheek of this, and New Labour has to try really fucking hard to astonish me these days:

“No one thinks, having seen the result at the polling stations, that President Mugabe has won this election.

“A stolen election would not be an election at all. The credibility of the democratic process depends on there being a legitimate government.

I’m sorry, but aren’t you an un-elected Prime Minister who ascended to the position without an election or electoral mandate and without any opposition from within your own party? I’m pretty fucking sure that you are. Mugabe is a horrible, horrible man, I’ll not dispute that, but you, Great Leader Brown, are the last fucking person on this planet to pass judgement on his election credentials.

You can fuck right off with your holier-than-thou speeches on democracy, frankly. What a load of old horseshit.

It must be great living in Railway World

What is it with train companies? Like banks, they seem to live on a completely different planet to the rest of us. Last night Chris and I were booking transport from Heathrow to Manchester for when we return from Gran Canaria and, on failing to book a domestic flight because we get into Heathrow too late in the evening, we were left with no alternative other than a train. This is fine, trains from London to Manchester are fast and frequent and usually very well priced, not to mention the fact that they’re way more environmentally friendly than domestic flights.

So I went onto thetrainline.com, which is apparently the only national rail booking service (so it’s not like they have any competition to be price-conscious with), and searched for trains from Heathrow terminal 1 to Manchester on the evening of Monday 12th May. I specified standard class and two adults. The minimum price quoted was £159. First class tickets were in excess of £400.

This, as you will agree, is quite ridiculous. I know that trains to Manchester, off peak, in standard class and booked far enough in advance can be booked for as little as £13.00 per person. I also know that the Heathrow Express and the tube, which the quoted price included, cost £15.50 and £3.50 per person respectively. So I did another search, this time for the last train from London Euston to Manchester, and sure enough it came up as £26.00 for both of us (£13.00 each). This means that the previously quoted price included £133 for 2 adults to travel from Heathrow T1 to London Euston, when I know that the actual price will be £38, buying walk-up tickets.

Where the hell are they getting this extra £95.00 from? For the privilege of not having to buy separate tickets for the various legs of the journey? We could buy the walk-up tickets, throw them in the bin and take a cab to Euston and still have a decent number of notes in our pocket out of that £133 that they wanted me to pay to get 20 miles from the airport to Euston. What the fuck?

Incidentally, were we able to take a carbon-belching domestic flight from Heathrow to Manchester it would have been £88 for the two of us, including all the taxes. Go figure.

Liverpool, a city crying out for a purpose 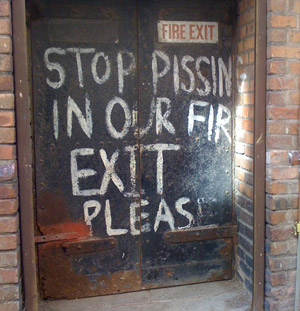 What a total shithole Liverpool is. I went there on the train today to fix something that had gone wrong at Chris’ Dad’s as yet unused new office there and the place hasn’t changed at all since I last went, which has to be three months at least.

There’s still a sky full of cranes from any number of building sites, each one of which has imposed some sort of temporary road closure in its environs, which would normally be acceptable except all the different construction companies don’t appear to communicate with each other regarding their road closures and temporary one way systems and so it’s actually possible to get trapped in a one way system from which there is no escape, if you’re in a car. Even pedestrians come up against sealed off streets with no alternative route presented, and I know the particular area of the city in which this office is reasonably well; heaven help a visitor to the city. The roads and pavements that are open are all wet and filthy with building site muck.

Yes, I know that all these building sites will eventually make Liverpool a better place and that it’s in the middle of a transition period at the moment, but I do have ask to ask to what end? Liverpool, far from being the globally important shipping hub that it used to be, is just another boring British city, trying desperately to catch up with its trailblazing Mancunian neighbour, but it’s just too late to the party if you ask me. Birmingham, Leeds and Sheffield are the same, they’re all building sites too at the moment, keen to compete with Manchester, but it’s all a little trite now. Manchester’s done it; it’s rebuilt, revitalised and it’s fabulous. Why bother with anywhere else? I love it here. Were it not for the fact that I have family in Surrey I probably wouldn’t ever leave the city, holidays notwithstanding.

The Liverpool locals haven’t changed either, but then I didn’t expect anything else. They still seem to actually go out of their way to get in mine. I don’t know what it is about Liverpudlians, they just seem to have this knack of getting in my way more than locals in any other city in the country.

Found this little gem on bash.org: