I bought these postcards nine years ago whilst on my trip around the western United States. They’re as relevant and insightful now as they’ve always been and so when I stumbled across them today I thought I’d share, because I’m nice like that. 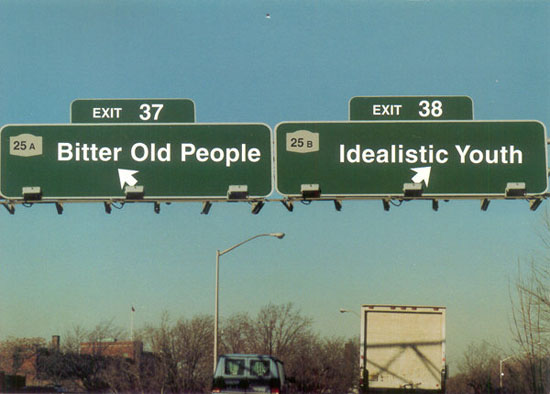 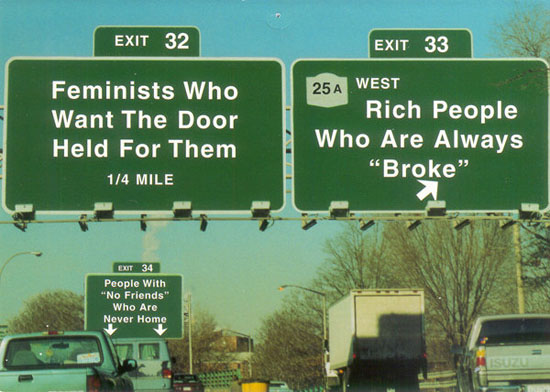 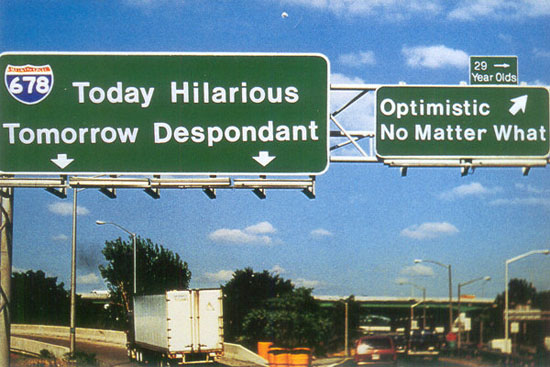 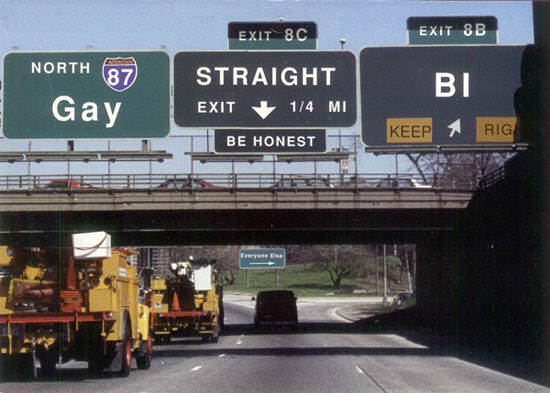 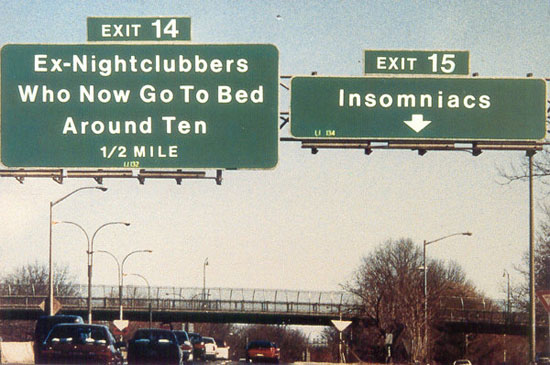 Watched The Simpsons Movie in the cinema last night. I’m not a hardcore Simpsons fan although I far from dislike it and will watch it and usually find it amusing if it happens to be on the telly. I won’t make a point of turning the telly on for it though. However, I did think that this film was rather pointless. It really offered nothing more than an average Simpsons episode aside from the fact that it was three times as long. Other than that there’s really nothing to set it apart.

Part of the problem is that I really can’t stand Homer Simpson. Yes, I know he’s supposed to be a stupid, selfish oaf, but it gets too much for me and often episodes turn into All About Homer with scant attention paid to some of the other characters whom I do find genuinely funny, like Patty, Selma, Fat Tony, Apu and Mr. Burns. This movie was no different. I thought it would be a great opportunity to give most if not all the Simpsons characters an outing, but instead it just turned into another story about how stupid Homer is and how he is forced to make amends.

They tried to add a little twist at the end by killing off one of the characters, as they did with Maude Flanders, but they chose such a minor and inconsequential character to kill that it made absolutely no difference. There were some genuinely funny gags in it; indeed the first 20 minutes of the film were very funny, but after that it definitely tailed off and I remember noticing about halfway through that the audience hadn’t laughed for quite a while, and it was a full house mostly comprised of giggly teenagers high on fizzy drinks, so it’s not as if the target market was different.

By all means go and see it if you’re a die-hard Simpsons fan, but otherwise I wouldn’t even bother with the DVD, just wait for it to appear on the television and after the first 30 minutes you’ll wonder why the episode hasn’t finished yet and realise that it must be the movie.

Mac Format dumbs down UNIX for no reason

I bought Mac Format magazine at the weekend, which was the first and will be the last of such occasions. Aside from the fact that it was six quid for what is actually a very thin magazine, and ignoring the fact that the “full version” software supplied on the accompanying DVD was, in fact, a restricted demonstration version (presenting a clear violation of the Trade Descriptions Act), I was particularly appalled at one of the features in the magazine which concerned itself with Mac OS X’s UNIX underpinnings.

One of the things I like most about Mac OS X is that it can be as simple or as advanced as you wish to make it. If you are a UNIX-head like I am then your familiar environment and tools are there if you want to use them. But if you are quite the opposite and you’re a floral trouser wearing designer hippy then you most certainly do not ever need to go anywhere near the operating system’s UNIX like features and interface. This is in stark contrast to modern Linux desktops, which are trying their hardest to become like this but still rely on the shell (command prompt) to a degree and thus force its users into its UNIX world on a reasonably regular basis.

So this article in Mac World attempted to introduce the “normal” Mac OS X user to the operating system’s UNIX base by describing the Terminal program and presenting a basic command, which was:

This command was “translated” into English by the author of the article and the translation read “run a filesystem check on the system binaries directory“.

This, as anyone with even a basic knowledge of command prompts let alone UNIX specific command prompts will know, is an absolute load of bollocks. Yes, fsck is the program that checks file systems, similar to “chkdsk” or whatever on Windows, this is true. But it is certainly not true to say that “/sbin/” is somehow an argument passed to fsck to tell it just to check the contents of the sbin directory. sbin is merely the path on the disk to fsck. The arguments to fsck are “-fy”, which in this case are quite irrelevant and in no way tell fsck to just pay attention to a particular directory.

This might sound pernickety, but this is simply misleading and represents unnecessary and frankly dangerous dumbing down, something which the BBC News website is guilty of on an almost daily basis in articles in their technology section. If you’re going to introduce Mac users to the wonderful and historical world of their computers’ operating system’s origins then either do it properly or not at all. UNIX is complicated and difficult to use; this is a commonly known fact and it makes no apologies for it. As discussed previously Mac OS is pretty unique in that you don’t even need to know that UNIX exists in order to use it, so there’s no reason to try to dumb it down for its users. You’d be better off pretending it doesn’t exist.

Of course, it’s entirely plausible that the author of the article actually believes what he’s writing and that, from his point of view, he isn’t dumbing anything down at all. If this is the case then I ask how he got the fucking job in the first place and to whom I should apply to write the column in his place.

It totally winds me up when “technical journalists” dumb things down to the point where they actually don’t tell the truth, whether they are aware that they are doing so or not. Whatever good intentions they have about making technology news understandable and accessible to “normal” people, it should be acknowledged that computers aren’t always point-and-click and not everybody is or can be a computer expert. How some of these people are paid for their drivel staggers me.

Transition to the Mac side complete 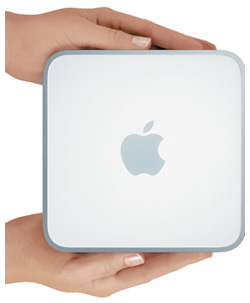 For a long time I never thought I would ever get to this point, but it’s now official: I don’t use Microsoft Windows any more. I have decided to stop using my PC at home in favour of using my Mac Mini instead. This now means that my home computer, work computer and laptop are now all Macs. All the servers I am responsible for run Linux, save for just one virtual server which runs a couple of customer ASP sites under Windows 2003 Server. This means that, to all intents and purposes, Microsoft Windows is no longer part of my life after twelve years of use.

I thought long and hard about using the Mac Mini in preference to my PC. Its specification isn’t as good in that it only has a 1.5Ghz Intel Core Solo processor, versus the PC’s 3Ghz Pentium 4 processor, and until yesterday it only had 512Mb of RAM, which made it difficult to use. However, it now has 1.25Gb and the upgrade has made it perfectly usable. I do lose my multiple monitors though since the Mac Mini only has one DVI port and its limited upgrade path means that there is no way to add another. This I had to consider very carefully, so I gave it a go with just one 20″ 1600×1200 display for a couple of days and, you know what, it’s worth the sacrifice.

So the PC’s going in the loft along with one of my screens. Yeah, it’s nowhere near as fast as my fantastic computer in the office, but for the odd day in the week working from home it’s absolutely fine. I’ll be replacing it with a Mac Pro of my own in due course anyway, at which point I’ll be back to two monitors.

The memory upgrade in the Mac Mini, incidentally, was a right pain in the arse. If you’ve ever attempted to get inside a Mac Mini you’ll know exactly what I’m taking about what with the fucking putty knives and brute force required. Still, it’s done now, and for £30 for a 1Gb memory module from Crucial it was well worth it.

So yeah, now I’m a full time Mac Snob. Added to that, Chris got a Macbook Pro this weekend (from his parents, officially for work), so between us we now have an example of each model in the current Apple range (Mac Mini, iMac, Mac Pro, Macbook and Macbook Pro). How sad!