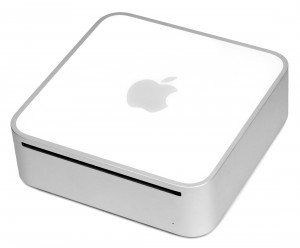 I never used it as a media centre beyond the odd occasion and it’s spent the last 18 months mostly consuming enough power to sleep and collecting dust. Until this evening, that is. I’m moving again soon (which I’ll cover in full in a different post) and I’m trying to take as little as possible with me. I was using an old Dell PC as a local Linux development server, which isn’t anything special but did the job nicely. There were three problems with it, however, specifically that it’s as ugly as hell, chews through electricity because it was manufactured at a time when computer manufacturers thought it grew on trees, and it belongs to my housemate.

I don’t really want to take it with me when I move because of all of those reasons, although I’m sure the last one could be eliminated with £30 or so. Then I remembered that I had this entirely idle old Mac Mini tucked away on a corner of my network doing nothing. I wondered if it would accept an installation of Ubuntu Server, given that it’s an Intel-based Mac (the original Intel Core Solo model, no less). Sure enough, it turns out that it can, and it works a treet.

My old Mac Mini has a 60Gb hard disk and 1.25Gb of RAM. It’s not going to break any records with its single-core 1.5Ghz processor, but for running a local Apache2 server it’s nothing less than what I need. The only caveat is that it won’t boot on its own into Linux straight from the hard disk, I have to keep an CD with rEFIt on it in the CD drive for it to do that; it’s certainly not the end of the world.

From a cold-boot to getting a login prompt with all services started it uses just 85Mb of RAM and with all the software I need on it and my Git repositories in place it’s using just 2.5Gb of it’s hard disk. All this on a 65 watt power supply. In addition to this, and despite the fact that it’s very different internally to my new Mac Mini, the two look identical from the outside and so look pretty good stacked on top of each other.

So don’t throw out your old Mac Mini, give it a proper job to see out its old age! The only thing I can’t do with this which I was thinking about doing with the Dell PC was putting an x100P card in it. I’ll live.