BBC NEWS | Politics | Cameron hails ‘end of New Labour’ – it was no secret that the worst local election results in 40 years and the election of a Conservative Mayor of London would be quickly followed by the first by-election loss of a Labour seat to the Conservatives in 26 years, a seat that was previously held by a single Labour MP since its creation 25 years ago at that. It doesn’t get more humiliating than that and I think that the only clearer sign that New Labour could possibly be given that their time is up would be a defeat at a general election. I just don’t know what else could possibly happen to let them know how the electorate feel about them in the meantime, everything has surely been done.

Tamsin Dunwoody lead a repulsive campaign against Edward Timpson, claiming that he was a “toff” with a £53m fortune and implied that somehow these things made him unsuitable to be the Member for Crewe and Nantwich, and that somehow an unemployed mother of five would be perfect for the job. Regardless of the fact that it’s Dunwoody that appears in Burke’s Peerage and not Timpson, Dunwoody was the daughter of the previous Member, Gwynneth Dunwoody, who held the seat for 25 years before she died. I’m sorry, but with contacts like that you’re only unemployed if you want to be and if it suits you, and it obviously did in order that she could wage her pathetic class-war against Timpson, whose family built their business from nothing, a business that provides essential services to the public up and down the country, employing local, skilled people in every branch. Why on earth should that be considered by anyone to be a bad thing? It’s nothing more than Labour’s familiar old sour grapes about anyone who’s not happy just being another brick in the wall and has dared to make something of themselves.

New Labour deserved to lose this by-election in every way conceivable, and the Conservatives deserved to win it based on the dirty-tricks campaign alone, although obviously this is not the only reason why they will have won. Good for you, Edward Timpson, and screw you, Tamsin Dunwoody, you sadly typical New Labour hypocrite. You must’ve though that you were just going to inherit that seat off your mother in some kind of grotesque New Labour ascension, not unlike that of Gordon Brown’s last year. How wrong you were.

Of course, Gordon Brown and his sound bite scripted cronies are claiming that the loss of the seat is due to the global economic climate, that people are feeling the pinch and want to send a message to him to steer us through it. It has absolutely nothing to do with the fact that he’s the worst Prime Minister that this country has had for 40 years and that everyone is sick to the back-teeth of New Labour’s endless incompetence, taxation and bullshit. No, perish the fucking thought.

2010 suddenly doesn’t seem that far away. There’s light at the end of the tunnel, and not before time.

So on my way out to Gran Canaria (full blog on that coming soon, promise), British Airways knackered the retractable handle on my suitcase, presumably in Terminal 5’s infamous baggage handling system. I was left carrying it for the rest of the journey (a further two flights) to Gran Canaria, and obviously all the way back too (another two flights).

When we returned to Terminal 1 on Monday I went up to the customer service desk, fully prepared for the mother of all fights with a jobsworth hiding behind the company’s terms and conditions and stating categorically that British Airways couldn’t possibly be held responsible for damage to personal property caused by uncaring staff and/or malfunctioning machinery and that it’s left at the owner’s risk, yadda yadda yadda. But it never came, and I was all geared up for it too!

Instead, a very nice gentleman took the details of the suitcase, produced a catalogue of luggage from under his desk and asked us to identify the suitcase in it, filled in a form in front of us and then without even looking at (much less actually examining) the suitcase, stated (without any sort of fanfare) that he was very sorry for the damage and that a replacement suitcase would be delivered to me in three to four days.

Well, you could have knocked me over with a feather. The same was true on Wednesday, when, sure enough, the replacement suitcase was delivered to my apartment. Not some cheap knockoff, the real Samsonite deal, a direct replacement.

Everyone loves to slag off British Airways but on this occasion I really can’t fault them. Good for them. Bigup.

Posted on Thursday 15th May 2008 by Stuart Ford 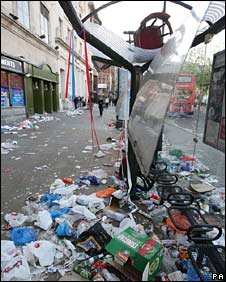 The whole of Manchester city centre is in a terrible state this morning. Every street is covered in empty cans, beer bottles, plastic glasses, discarded fast food, newspapers and other miscellaneous detritus. It’s absolutely fucking revolting and I am nothing short of appalled at the way that these 150,000 people, who clearly had absolutely no respect for their hosts, have behaved. Frankly, they deserved to lose the game. The debris is everywhere, even the station concourse this morning was covered in beer, puke, chips and what have you, with some still drunken fans wandering around shouting about how “shite” Manchester is, despite treating our police force like hunted prey, wrecking residents’ property and complaining when their expectations weren’t met to their standards.

Tell you what, I’ve got an idea that will keep us all happy. Why don’t you all fuck off back to fucking Glasgow, or wherever it is your crawled out from, where it’s apparently completely acceptable to treat your city like a sub-human pigsty, fucking stay there, and never fucking come back? I’d be game for that, and since you consider Manchester to be so fucking awful, you should be too. I, nor anyone else who lives or works in Manchester I expect, ever want to see the likes of you here ever again and I’d be surprised if any other city felt differently.

Furthermore, whichever organisation made all the profit out of yesterday, be it UEFA, City stadium or Rangers FC, I don’t fucking care, should be made to foot the bill for the cleanup. Why on earth should I have to put up with this when someone else has made a killing out of it? Glasgow should be made to make an official and public apology to Manchester for the way in which its residents have behaved; certainly if 150,000 Mancuncians descended upon Glasgow and left it in that sort of state there would be an outcry, swiftly followed by yet another handout from English taxpayers to clean it up.

I hate football at the best of times, and yesterday has done absolutely nothing to improve my opinion on it. The “beautiful game” and all its “supporters” can fuck right off and fucking stay there.