The Queen’s 60th Jubilee celebrations took place over the weekend of 2nd to 5th June. Although my primary focus for this weekend was Birmingham Pride, I also took time to enjoy these celebrations, which, although not once-in-a-lifetime like having the Olympics hosted on home soil, are rare in that they only happen once every ten years. I remember my late mother being very much into the Golden Jubilee celebrations  in 2002, the same year in which she later died, whereas I was quite indifferent to them. Since then I’ve become more patriotic and royalist and so this time I took more of an interest, for these reasons and also because my mother no longer can.

I put bunting out on the balcony and I watched the television coverage of the events during the weekend. I was appalled as many others were at the shocking BBC coverage of the river pageant, but I won’t dwell on that. There’s every change that Queen Elizabeth will spend another ten years on the throne and so the BBC will have a chance to make amends. Unfortunately because Birmingham Pride was taking place during the same weekend I was unable to attend a street party that my family was involved with in Walton-On-Thames, which was a shame, but I couldn’t miss Pride given that I was more heavily involved with it this year.

I wasn’t too sure about the concert, however. It’s not like we need any more reasons to give the usual celebrity suspects more air-time, we get more than enough of them as it is, and the whole Gary Barlow angling for a knighthood thing was just plain crass. He also isn’t going to get it, his concert may well have been held on the Queen’s driveway but it’s going to be nothing compared to the Olympics opening ceremony in July. That all said, respect to the Queen for allowing it to take place, even if she did show up late!

Respect to the Queen from me doesn’t end there. I think she is an outstanding asset to this country. She may well have led a life of absolute privilege but that does not mean she does not work hard for this country and care about it. I also think that she’s become much better at this over the past fifteen years since the death of Princess Diana, demonstrating consistently that the monarchy has the ability to modernise with its subjects. The British monarchy is the envy of the world and no other monarchy can hold a candle to it, indeed, most other monarchs around the world are unpopular despots. Nothing could be further from the truth with ours, and I hope that these ridiculous Republic people saw that laid bare during the royal wedding last year and the jubilee celebrations this year.

Last year saw my first Birmingham Pride, after having spent seven years living in Manchester and having Manchester Pride on my doorstep. I enjoyed it, but only to a point, as last year I was living out in the sticks of Sutton Coldfield and was not properly able to immerse myself in the event to the degree to which I had become accustomed during my years in Manchester. At the end of it I vowed to myself that I was enjoy Birmingham Pride 2012 much better, having set myself the goal for moving into the city centre in the year that followed.

I achieved that goal five months later, and so this year I was able to deliver on the promise I made myself and I had a Pride much more along the lines of what I am used to, being able to dip in and out of it and be able to quickly and easily return to my home base as needed and use it as a rendezvous point for with my friends. Indeed, I am fortunate enough to actually live on one of the streets that the parade passes down. Although I could have viewed it from my sixth floor balcony I chose not to and instead view it from the roadside with everyone else of course. I was grateful for the handy access to a toilet once it had finished, however. 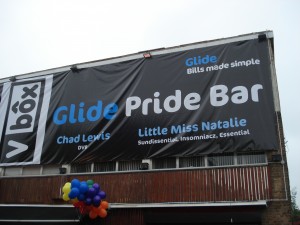 This year I got much more involved. The company I work for, Glide, sponsored the iHost bar. We paid for the events banner on the outside of the building and also branded up the inside of the bar, where some well known DJs from Birmingham and Manchester played classic house all weekend. The bar was constantly busy from morning right through to when the main club opened and beyond. It’s impossible to measure any direct impact on sales or web traffic, and that was never our intention, the whole point of the exercise was brand proliferation and given how much it cost Glide definitely got bang for buck and we received a lot of respect from our industry peers for having got involved.

Outside the “Glide Pride Bar” Pride itself was much like it was last year except for one major difference and that was that this year was the first year that an entrance fee was levied for the “entertainment arenas”. Up until and including last year Birmingham Pride was the largest free music festival in the United Kingdom, but at a tremendous cost to the local businesses who paid for the main stage, the cabaret tent, the dance tent and other entertainment features. The rest of the event was largely funded by various grants, including generous support from Birmingham City Council and West Midlands Police. This was not sustainable, however. Many believed that the venues who put on the entertainment were able to pay for it out of drinks takings, but these takings did not cover the cost, and so it was decided this year that although the Pride event itself would remain free (unlike for example Manchester Pride, where you need a ticket merely to enter the village cordon), there would be a £10 charge for the entertainment to cover the cost of running it. 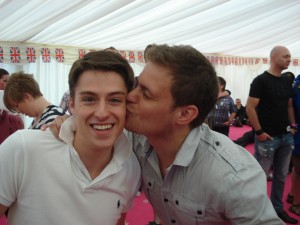 James makes Jon his honorary boyfriend for the weekend

There was outcry over this from some factions, typically skint students who expect everything for free anyway, so that came as little surprise. I had no problem paying £10 for the weekend (although admittedly Glide paid it for me, I wouldn’t have otherwise hesitated) and I noted that it had the added benefit of dissuading less desirable Pride “guests” who had been known to spoil previous events from coming. As one drag act Baga Chipz put it succinctly, “it keeps the fuckin’ riff-raff out”. I spent most of the weekend in the Village Cabaret Tent as this was the most entertaining and social of the venues. I didn’t care much for the main stage acts. On Saturday I went to Poptastic, a well-established club night run by a friend of mine in Manchester who was running it for the first time ever at Birmingham Pride.

I had proper Pride blues the day after. I always do after Pride, I used to get them when I lived in Manchester and went to Manchester Pride too. It’s always a sign that I’ve had a good weekend. I don’t know if I’ll go to Manchester Pride this year or not. I didn’t go last year and I can’t honestly say I really missed it. If I do go it’ll all be very last minute.