After five days of uncertainty following on from the results of Thursday’s General Election after which we were left with a hung parliament, we now finally have a new government, a coalition between the Conservatives and the Liberal Democrats, and a new Prime Minister, David Cameron, who replaced the incumbent Gordon Brown after he resigned in a dramatic series of events on Tuesday evening of this week. It’s been a very dramatic few days and they’re going to change the face of British politics significantly, I hope for the better.

Before I get started I’d like to remind everyone of my personal rule that I’m not allowed to complain about a government that I voted for. I stand by this. It still allows me to complain about the previous government and the current Labour party (such as it is), however. I also believe that nobody who was eligible and able to vote, but didn’t, has the right to complain about the current government either. You had your chance to make your voice heard. This obviously doesn’t include people who were turned away from polling stations at 10.00pm on polling day, although one might argue that had they not all turned up at the last minute and gone out and voted earlier instead of watching soap operas it wouldn’t have been so much of a problem.

Here are the full results from the election on Thursday 6th May, excluding the result from the one seat that wasn’t elected because one of the candidates died during the campaign. Parties that did not win any seats are not included. For a full table including all parties that stood in the election see the BBC News results page.

As you can see, no one party received an outright majority of at least 326 seats, meaning that at least two parties needed to band together to form a government with at least that majority. Labour could not have formed a coalition with just the Liberal Democrats, they still would have together fallen short of the 326 seats needed, so they would have needed to add minor parties to their coalition. This would have made their government very unstable, even if they did agree on (most of) their policies, which they evidently did not since their coalition talks broke down. The Conservatives and the Liberal Democrats together have enough seats for a majority and have therefore been able to form a government. 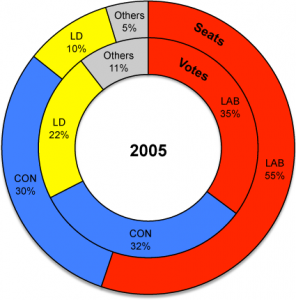 As you know already from my previous post, I think it’s grossly unfair that it seems to be easier for some parties to win more seats with a disproportionate share of the vote. In the 2005 election Labour won 55% of the seats with just 35% of the vote. In the 201o election this fortune was reversed (almost) for the Conservatives, whereas the story remained virtually the same for the Liberal Democrats and the minor parties. Although I am glad that the Conservatives have achieved power, albeit in a coalition, I still believe that this system is unfair. 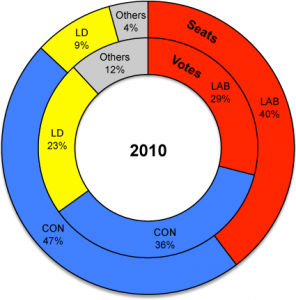 It will be very interesting to see what proposals the new government comes up with regarding electoral reform, which was apparently one of the key parts of the deal struck between the Conservatives and the Liberal Democrats. Apparently any change to the current system is likely to put the Conservatives at a disadvantage compared to their current position and do the opposite. Although this obviously won’t entirely serve the best interests of the party that I support I also must consider that a reformed system will be fairer, something which I have obviously advocated in this and previous posts. My big concern is that a new system may make it difficult for any party to win an outright majority at general elections and that as a result we will always have to form coalition governments, which whilst sometimes necessary aren’t ideal.

The end of the New Labour nightmare

It was a long time coming for Gordon Brown and New Labour, but it didn’t come soon enough. It was obvious to me from a very early stage when Brown ascended to the prime ministerial throne in 1997 that he wasn’t Prime Minister material and that as a result New Labour is nothing without Tony Blair. It frankly wasn’t all that even with Blair given some of the scandalous things that happened when he was in Downing Street. As I said in my last post, Labour have delivered some good things during their thirteen years in power but for the most part this country is in a far worse position, both economically and socially, than when it took power from the Conservatives in 1997.

Gordon Brown should not have become Prime Minister uncontested and because he did he should have called a general election straight away. Since then he became the most unpopular Prime Minister that this country has had since the war and it was this, despite what Keith Vaz insists, that was the ultimate downfall for Labour. Brown has admitted this since his resignation, although some sycophantical Labour figures have already dismissed this as untrue, claiming that it was just Brown being honorable. I believe that Gordon Brown knew that he couldn’t fix his mistakes some time ago but couldn’t bring himself to resign because of the uncertain position it would have put the party in advance of the election.

Labour are now back on the opposition benches of the House Of Commons where they belong and where they cannot do any more damage to this country. It’s going to be a very long and arduous journey to full recovery from their reign, one which will require some very unpopular decisions from the new government, but we have to start somewhere and I do not believe that a different government from the new coalition government would have any easier a time of it.

In short, it’s goodbye and good riddance to Labour.