On Tuesday 6th October Sky 1 starts screening the new Stargate series, Stargate Universe (SGU), the second spin-off from Stargate SG1, itself a TV spinoff from the original 1994 Stargate film and which is the longest running science fiction TV show ever. This follows the recent cancellation of Stargate Atlantis, which lasted five seasons in contrast to Stargate SG1’s ten.

This time the series is based around a Stargate Command (SGC) team that ends up stranded on an ancient starship, the “Destiny”, in a distant galaxy with no way of returning home through the Stargate system. Obvious parallels can be drawn between this and Star Trek Voyager, in which a vessel and its crew becomes stranded in another galaxy. This is no bad thing since the concept worked successfully with Voyager.

I have high hopes for this series. The trailer is very exciting and its clear that it has high production values. Certainly, the producers need to do something to revive the franchise a little, since Stargate Atlantis became really quite ropey during season 4 and season 5 and it came as no surprise to me that it was cancelled. SG1 was cancelled a couple of years previously, but after 10 years of quality sci-fi it was reasonable to do so. I was a little doubtful over some of the ways in which they tied up some of the loose ends but they had to draw the line somewhere.

Robert Carlyle, of Full Monty and Hamish Macbeth fame, plays the lead character, picking up the gauntlet from Joe Flannigan and Richard Dean Anderson from Atlantis and SG1 respectively. It’s a relatively surprising choice since the lead character is traditionally an all-American military man, whilst Carlyle’s character Nicholas Rush is a scientist, but that may indicate that the producers intend to try some new ideas with this series so it’s not necessarily a bad thing. The producers also intend to include occasional appearances from characters from the other Stargate series, which is always nice.

The producers of the show do not see it as a “spin-off” in the traditional sense as it has been designed to be able to be enjoyed by both seasoned Stargate fans (known as “Gaters”) and newcomers to Stargate. This is a very positive step as it’s important to get new people into Stargate, especially considering its overall age (15 years). Original fans are getting older and will eventually become fewer, so it is important that the new series is able to be understood and enjoyed without prior knowledge of previous Stargate stories told in SG1 and Atlantis. However, it is also important that they do not violate precedents already set in these earlier series, because existing fans won’t like that.

So yes, I’m very much looking forward to it. More detailed information on the series can be found over at Wikipedia.

Another year, another Pride. Four days of hard work, hard play and general excess have once again come to an end. It wasn’t the best Prides I’ve had but all things considered I wasn’t disappointed with it. A combination of recession and bad weather meant that it was never going to be the best Pride ever, but despite that, everyone made the best of it and there was a great turnout and a fantastic atmosphere all throughout the festival. I’ve little to complain about, all told.

I spent Friday night in the Village and saw the opening events on the main stage before spending a couple of hours flyering for Manfest, an event that took place on Sunday run by a friend. I didn’t stay out late on Friday because I needed to be up on time on Saturday to prepare for the parade, with the Manfest float. The weather just about held off for the parade, which is good because the parade is hard work enough without having to deal with rain at the same time. 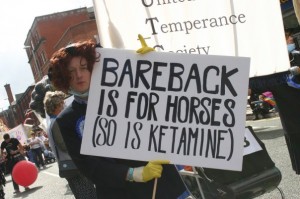 The parade is a wonderful event. It brings thousands of people from all around in to Manchester to line the streets. It truly is the highlight of the Manchester calendar, nothing else comes close to it. Manchester Pride as a whole is the single most important annual event for Manchester, since it’s not just about promoting and supporting the LGBT community but also Manchester as a whole, which is why it’s so heavily supported by the city council and the Greater Manchester Police.

On Saturday evening I took a break from the festivities and met an old friend from university in Spinningfields for a drink before succumbing to the exhaustion of the day, meaning that I didn’t get to do Federation‘s University Challenge this year.

I didn’t do much on Sunday save for a mooch about the Village marketplace and lifestyle exhibition. I bought another leather cuff from Rebel Dogg who have a stall at Pride every year. Their products are beautiful and almost collector’s items; I intend to buy one every year from now on. 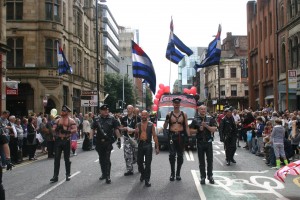 On Sunday evening I helped set up Manfest but I was unable to attend the event itself, unfortunately, because I was knackered again, but I understand that it went off very well. It was held at Satan’s Hollow next door to Cruz 101, which is normally a straight rock club and it’s a fabulous venue. The dark and spooky theming inside is outstanding, I’ve only seen better in Disneyland. A lot of money and creativity has clearly been put into it.

I got up at a decent hour on Monday and see some of the fantastic live acts on the main stage. The sun came out and it was actually quite warm for a while before the clouds came back. On Monday evening I attended the Candlelit Vigil in Sackville Park, which I like to do every year because it’s a very touching event and I love the feeling of togetherness that it creates.

I had some nosh and a few drinks in the Village after the vigil and then went over to AXM for Sugarpops (a cabaret show) before turning in at about 3.00am. Walking back home through the village was quite surreal, everything was being packed up, with various lorries and machines scurrying everywhere, yet still there were people out on the streets drinking and enjoying themselves despite the rain.

By Tuesday morning when I went back in to the Village on the way to somewhere, everything was back to normal and it was as if it had never happened. Back to reality for another year. Almost overnight it has become autumn and the world feels like a completely different place. Nevertheless, it’ll all happen all over again next year :)