For the first time in a number of years now I have purchased a new computer. The last computer I purchased for myself (i.e. wasn’t a work computer) was my Macbook in 2006, itself now on its last legs and due for a replacement. My new computer is a new (face-lifted) Mac Mini, which replaces my old Mac Mini, which is also of 2006 vintage. The new computer has a dual-core 2.53 Ghz processor, 4Gb of RAM and a 320Gb hard disk. This is in stark contrast to my old one, which has a single core 1.5Ghz processor, 1.25Gb of RAM and a 60Gb hard disk, and as a result had become remarkably difficult to use over the past year ever since it became my main desktop machine. It’s now been turned back into a media centre, which it seems to be much happier doing. The new one is unbelievably fast. Its only bottleneck is the graphics controller which shares the main memory, but it’s not as if I’m going to use it for any hard-core gaming anyway (the most hard-core it’s going to get is Homeworld 2 and Spore).

One of the main advances of the face-lifted Mac Mini over the old design is the fact that it supports dual-monitors. Up until the release of this model last year if you wanted dual-monitors on a desktop machine you either had to get a Mac Pro or connect a second monitor to an iMac, both expensive options if you’ve already got your own monitors from a previous machine, so it was a dream come true when they added two monitor ports to the Mac Mini because it’s such a cost-effective option.

So yes, I’m very happy with it. Next is my Macbook as mentioned before, which gets replaced with a 13″ Macbook Pro later in the year, or whenever my Macbook gives up, whichever comes sooner. 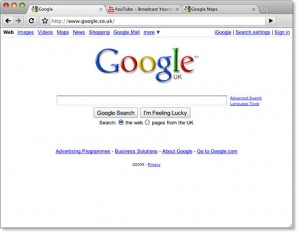 Google’s new brower, Google Chrome, certainly isn’t a new thing. But it is only recently that Google have finally released a version for Mac OS, so I’m a bit late on this particular bandwagon.

Chrome is based on the WebKit engine, which is the same engine used by Apple’s Safari browser. WebKit used to be a little ropey but ever since the release of Safari 3 it’s actually been very good, certainly comparable to the quality of the Mozilla engine, which is what Firefox is based on.

Its best feature is that it’s very lean and fast. Certainly, it seems to use less CPU than Firefox and Safari. It also uses a different thread for each tab, which means that while it may use a little more memory it also means that should a web page crash or become non-responsive due to a badly coded Javascript procedure or a crashed plugin it won’t cause the entire browser to quit, like it would in other browsers. Chrome simply kills off the non-responsive tab and the others carry on as normal.

Development tools are the same as Safari’s (the WebKit Inspector). These aren’t quite as well developed as the Firebug plugin for Firefox but they do an adequate job. I use Firefox to do most of my development with anyway and then test and modify sites to work in Safari (and other browsers if necessary).

There are of course a few niggles. If a page contains advertisements and an ad-server isn’t responding, this can cause Chrome to believe that the entire page is broken and it will refuse to render the page, eventually killing it off as a non-responsive tab. It would be better to ignore problems generated by loading content from non-responsive servers if they are not the same server from which the main page is being loaded.

The design of the master window means that most of the time you can never read the full title of a web page, since the title of each page is only displayed within the tab, rather than the title bar of the window, which in Chrome does not exist. This can be a little annoying when, for example, you have multiple BBC News pages open, since the title of each one is prefixed with “BBC News | Section name | …”, which usually takes up the whole width of the tab, meaning that all BBC News tabs appear labelled the same in the tab bar.

Other than that there’s not much to moan about and I’m sure it’ll improve with further development anyway. I would recommend it to anyone who’s tired of their existing browser, especially Windows Internet Explorer users. It’s available for Windows, Mac OS and Linux.