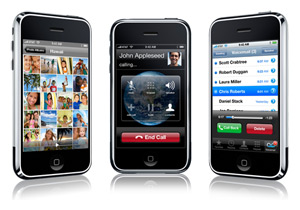 My old mobile didn’t survive Federation at New Year. I pulled it out of my pocket at about 1.00am and it had gone bonkers; it was just flashing numbers up on the screen and the keypad wasn’t responding. Removing the battery and restarting it dealt with the crazy numbers, but didn’t do anything for the keypad. I don’t remember getting it wet or bumping it into anything, but nonetheless, it was fucked.

I’d been holding off getting an Apple iPhone until the New Year anyway and the death of my old phone combined with the death of my last iPod in October left few excuses not to then get one, so I did. I absolutely love it; principally because it combines an iPod and a phone into one single device that’s 100% compatible in every way with my Mac computers, rather than some sort of third party bodged compatibility as provided by other manufacturers. It’s a total dream to use and allows me not only to make phone calls, listen to music and send texts but also read and write e-mail in a way that’s actually easy and works properly, and also to surf the web using what’s stops very very short of being a proper web browser.

Of course, I’ve had derision from many people for buying it, whose complaints tend to be centred around the same few issues:

I’d like to officially submit the following responses to these points so that people can shut the fuck up about them once and for all:

Any perceived compromises made are outweighed by its clear and irrefutable benefits. It’s great, for example, being able to listen to music and then have a phone call put through directly to your headphones without having to change devices or have a second device embarrassingly ring away in your pocket because you can’t fucking hear it. The iChat-style text messaging system is splendid, taking what Blackberrys do to a more logical conclusion. Google Maps works exactly how you would expect it to. It’s also frighteningly easy to download music off iTunes with it, although whether or not that’s a benefit is subjective of course.

If I had any complaints about it it would be that the camera isn’t particularly good and that they’ve been a bit slow in opening it up to third party developers. The former I can’t do anything about, but the latter will be resolved in February, apparently. I want an SSH client, an IRC client and an iChat client without having to use some sort of web application bodge. I expect my wishes will be granted relatively quickly.

So no, it’s not everyone’s cup of tea, but then nobody is being forced to buy it. Indeed, because of its price many people are being forced not to buy it, which I suspect is more of a motive to pick holes in it than people will admit to. It reminds me of those pricks who bray “oh yeah, well, I could have got a BMW but I got something much better instead“, whilst driving a fucking Passat or something.

Nuclear energy for the win

Congratulations, New Labour, you’ve finally proven that you are capable of making a rational, informed and sensible decision instead of pandering to holier-than-thou lobby groups, following political correctness and inflicting knee-jerk policies upon this weary populace that you so often forget have the power put you on the other side of the House of Commons.

I say that without an ounce of sarcasm. It’s perfectly obvious that nuclear power is the only realistic way to generate enough power to satisfy our baseline requirements over the coming decades without further contributing to global warming (sorry, “climate change”). Renewable energy sources have and will continue to have their place, contributing wherever they can to the National Grid, but they cannot hope to generate enough reliable power on their own to cater for our present requirements, let alone future requirements.

Three Mile Island is another example used by the anti-nuclear lobby as a reason why nuclear power is bad. But using Three Mile Island in that way is a total own goal. The Three Mile Island incident proved how safe reactors are when something goes wrong. All the safety devices kicked in when the problem was detected and the reactor was shut down. Surely that’s what we want to see? What would they rather had happened?

It’s a brilliant decision, and I don’t say that of New Labour lightly.

This is from the Wikipedia article on Beetham Tower in Manchester:

During the installation of the glass and steel ‘blade’ on the roof, a strange noise problem emerged. People reported that the building “whistles” (more like an intermittent hum) in windy weather. The sound is close to standard musical C (approximately 262 Hertz); some say it is like a “UFO landing” in sci-fi films. The noise also affected the production of local soap opera, Coronation Street with producers having to create extra background noise as the tower is close to the show’s set. Despite apparently rectifying the problem, the humming sound can still be heard on occasion in the area, depending on wind direction.

Yeah, like LAST FUCKING NIGHT between the hours of 4.30am and 7.30am when there was a monsoon outside and the winds were, apparently, blowing in the right direction to make it sound like I was in an episode of the fucking X-Files. It’s a miracle that I didn’t kill someone at the station this morning when they announced a last minute platform change from one side of the concourse right to the fucking other side.

Watched I Am Legend in the cinema last night. It’s another example of one of my favourite genres (i.e. apocalyptic and/or distopic futures) along the lines of 28 Days Later whereby a devastating plague has wiped out most of the human race and rendered the remainder inhuman in some way. It’s set in New York City in 2012 and tells the tale of a scientist who, for some reason, is immune to the plague and is attempting to find a cure.

Because it’s Hollywood, and not Danny Boyle with a DV Cam, the budget is quite a lot larger than 28 Days Later and so the sets and locations are more spectacular, creating an extremely eerie New York cityscape which was clearly abandoned very suddenly and in great panic. There are flashbacks to a back story, but they are mostly to do with the protagonist’s family rather than the disintegration of society.

As is typical with Hollywood, there’s a happy ending, but this does not mean it’s a bad film and if you love the genre as much as I do then you must go and see it. Same goes if you’re a Will Smith fan, he’s a very fine actor and this film is no exception.

My rail fare was increased by 5.3% yesterday along with above-inflation fare hikes from most train operating companies. This amounts to an extra £60 per year for me, assuming daily tickets and traveling 47 out of 52 weeks, which equates to about 12 days’ worth of travel at the previous rates. This is quite annoying, and although it doesn’t quite make rail travel unworkable for me, another price increase and I will have to seriously question it. This would be a shame, because I’m one of the few people in the country for whom rail travel is physically convenient.

The rail companies claim that they “need” this extra money in order to fund improvements in the railway system, which is the same excuse we’ve had for year upon year upon year with little return on the promises made. In fact, the only major railway infrastructure development that’s taken place since privatisation is the electrification of the West Coast Mainline, which is currently the subject of another fiasco, which, thankfully, does not affect me. I’d be pretty fucking annoyed if it did though, especially considering the fare hikes.

However, what does rile me is when, on the day when the fare hikes came into effect, my train home was six minutes late, leaving me and my fellow passengers freezing our tits off on the platform. What provision in the Passenger Charter is made for this sort of delay? None. I’d have to freeze my tits off for an hour before Northern Rail would even think about giving a proportion of my extortionate fare back.

Then this morning, the guard on the 08:32 watched me buy my ticket from his colleague, then closed the doors of the train as I was approaching it. He just shrugged at me through the window, in the fully knowledge that I intended to board the train and that I was being held up by his incompetent ticket-vending mate. Fucking unacceptable, they’re just taking the fucking piss.

Like I say, rail travel still just about suits me, but another fare increase and further examples of this sort of contempt for their customers will probably put me back in a car. That would definitely be a shame.