I find maps fascinating, I think they are beautiful works of art and I spend many many hours studying them, whether they are current, out of date, or even proposed. I find that no matter how long you’ve had a map or how many times you’ve seen it, each time you look at it you notice something that you hadn’t noticed before, and I really love that, it’s like an everlasting film that you don’t have to watch all the way through to find something else that you like.

Since moving to Manchester I have developed an active interest in the city’s history. I’ve bought many books with old photographs and accounts of how the city has developed over the past couple of hundred years and I study these avidly too. I was therefore delighted yesterday to find a whole bunch of websites using the power of Google which have some old maps of Manchester going back to 1801, some 203 years ago now. These, I found, were the best:

Many have asked me what used to be on the site that my apartment building is now built upon. As far as I can tell from the history books and peoples’ own accounts, before 2000 (which is when they starting building it) it was just a car park, land ready to be developed (as indeed it was). Before that it was a bit of wasteland for a bit in the years immediately following the demolition of St. Mary’s Hospital, which stood on the site, the site of the Ritz nightclub next door, and the site of the Lock Building which is next door to that:

I’ve no idea when this hospital was built or indeed demolished, but I do know that before the hospital was built there was a collection of buildings on the site, one of which was apparently a world-famous musical instrument store, situated about where the Sainsbury’s Local is now. Before that I don’t know, I suspect that was probably the original collection of buildings put there when the area was initially developed from farmland. Speaking of which, I found this street plan from 1801 particularly interesting, as it shows a very young and small Manchester, and while obviously in the throws of expansion, it was still absolutely tiny compared to what it is today, to the extent that not only is my building’s site out in the middle of nowhere, but so is St. Peter’s Church, which used to stand in St. Peter’s Square, now considered one of the principle city centre focal points.

And to put all this in context with the surrounding area, including St. Peter’s Church: 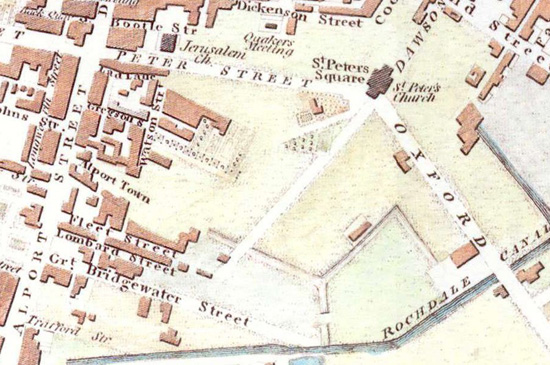 This particular map is obviously very old, 203 years to be exact, and if you examine the whole map you’ll see that there isn’t even a hint of a railway anywhere in the city, let alone any tram-like installations. This is firmly entrenched in the age of the canals, and even then the canal network has not yet been fully built (you’ll remember from paying attention at school that canals were basically superceded by the railways in the late 1800s).

So yeah, there’s my anorak bit for the week :)