Here is my holiday blog as promised. I’m not going to to into an incredible amount of intricate detail or anything, just a concise report on what I got up to. If you didn’t already know, I visited Uganda from May 23rd to June 7th with Chris. Chris has been before, as his best friend from school, Hrishi, lives out there, and indeed part of the purpose of this visit was to see him.

This is a general map of the country. During the first week we stayed just west of Jinja (find Kampala, then look west, Jinja is the country’s second city) in a place called Kakira, which is a huge sugar cane plantation owned by the family of Hrishi. During the second week we spent 4 nights in Semliki (look at to the east on the border with the Congo and find the Semliki river, it’s around there), and two nights in Mweya in the Queen Elizabeth National Park (look for Lake George, I’ve no other point of reference). 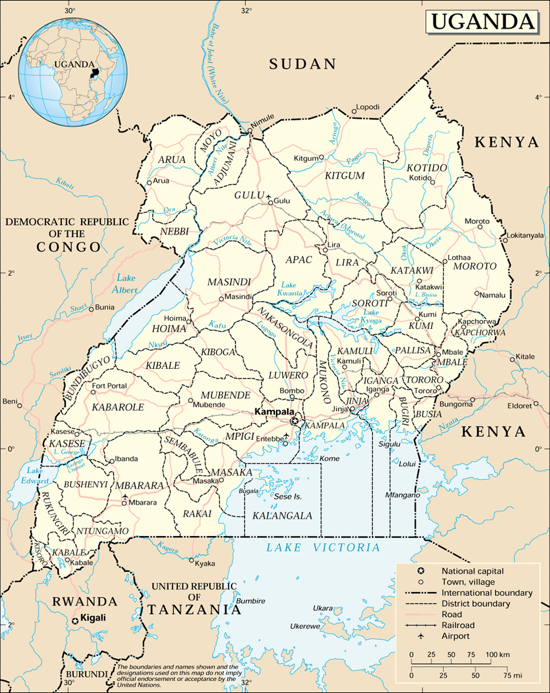 Hrishi belongs to the Madhvani family (of Indian origin), which owns the Madhvani Group, the largest company and the largest employer in the country. We stayed in their house which is part of a small wholly owned town on the sugar cane plantation, and is called “Kakira”. The town also houses many of the employees, and the company also provides schooling, healthcare and recreational facilities onsite to every employee. Compared to many occupations in the country, employees of Madhvani Group get an extremely good deal.

The house itself is called JMM Bungalow, JMM after the man who built it (Hrishi’s grandfather Jayant Madhvani), and “bungalow” is a word meaning “executive house” in India, possibly a colonial origin there somewhere. The house has quite a history, as does the family. The Madhvanis were kicked out of the country along with all the other Asian families by Idi Amin when he came to power in 1971, something which only came about because of the death of Jayant Madhvani, who had by then built up the Madhvani Group (originally started by his father) to be an economic powerhouse. This led to some economic uncertainty and instability, and gave the military dictator the chance he needed to seize power. It’s also rumoured that he proposed marriage to Hrishi’s grandmother, to which she refused, thereby exacerbating the situation, but this is unconfirmed.

Amin was eventually kicked out by the Tanzanians around 1979 after 8 years of terrorizing the people of Uganda and democracy was restored to the country. The Madhvanis were invited back in to the country to resume their businesses, which are essential to the economy of Uganda. However, the Tanzanians left their mark, as they ransacked the Madhvani’s houses for anything of value and used them as knocking shops. Presently Uganda has a stable political system and economy, and its temperate climate and fertile soil means that it’s an extremely prosperous country, especially when compared to some other countries in Africa.

Today JMM Bungalow has been restored, although not updated. It’s stuck in the 60s as far as decor goes, and normally this would be abhorrant, but there’s something about this house that makes it perfectly acceptable. Completely retro of course, but because it’s done to a high quality, it’s lasted a long time, and the period styling is consistent throughout, it’s not as if they’ve been updating certain rooms over time and leaving others. I dunno, it somehow “works”.

We spent the first week in JMM Bungalow and Kakira doing nothing, by design. Both myself and Chris have had a stressful six months and we deliberately did nothing for the whole week. There was a pool, extensive gardens, and 18 house staff to wait on us so it was an easy week. The food was all vegetarian indian fare, which meant of course I was farting my way through most nights, but it was jolly nice nonetheless. In the evenings we’d go to this backpackers campsite just outside Jinja where there was always a group of people our age from the four corners of the world. It had a great view of Bujugali Falls on the river nile, and they sold cheap beer, so we weren’t complaining, especially as we had a driver to cart us back to Kakira when we’d had enough.

The same bunch of people ran a white water rafting activity, which we did on the Wednesday. We went down 18 kilometres of the River Nile in (and out of) rubber dinghies, through grade 5 rapids. Marvellous fun, and the river was so warm too it was amazing. Bit smelly around the edges though, as is common with warm freshwater rivers. And yes, people really do wash their clothes in it, I witnessed it first hand.

During the second week we went on safari, firstly to Semliki Lodge in the Semliki National Park just a couple of miles from the border with the Congo, and then to Mweya in Queen Elizabeth National Park, owned by the Madhvanis. We were going to stay at a third lodge called Ndali in the middle of all that, but we got there and absolutely hated the place, it felt like a cult and we felt remarkably unsafe there, so we immediately left and hot footed it back to Semliki to spend another two nights.

This place was amazing, I mean truly amazing. It was at the ends of the earth, quite literally in the middle of nowhere, a good 2.5 hours drive through bumpy mountain roads to the nearest town (Fort Portal). It was a “tented camp”, which sounds awful but was actually very clever. They had 8 thatched huts (amongst the larger communal structures of the same style), under which they had pitched a large tent on top of a solid wooden floor. At the back of each hut was .. get this .. an ensuite bathroom with running water. There was no electricity, the whole lodge was lit using paraffin lamps. There was a bunch of small solar panels which they used to power the fridge, and they had a gas freezer.

This all sounds like roughing it, but nothing could have been further from the truth. In fact, this place was a full board hotel, with a chef and servants and housekeepers, the works. You just didn’t need electricity, or air conditioning, or even windows. Strangely enough however we got a full mobile signal there. The place even had a fully serviced swimming pool, and while I’m still yet to find out how they kept it clean without electricity, it was nonetheless in pristine order.

We went on a couple of safaris from here, one in mid-morning, another in the evening and finally one at the crack of dawn, in which we went looking for chimps in the rain forest. Unfortunately we didn’t see anything very interesting on any of them, but to be honest the “safari” part of staying in Semliki is secondary, the place was a paradise and we spent most of our time in and around the lodge. I could spend months there, I truly could. Definately one for the list of places to return to. Ironically, one of the owners met Craig last year when he went to Uganda for four months. Small world.

This lodge was completely different to Semliki, but by no means comparable. This was the westernized luxury 5 star hotel version of a safari lodge, comfortable in anyone’s books, but you simply couldn’t compare it to Semliki because of the wildly different format. I’d happily spend a week in either place. It was nice to come here to some air conditioning though, as the temperatures on the day of arrival hit 37 degrees C (99 degrees F)! We only spent two nights here, I could have spent a bit longer but we were bound by our flight home. The place was also virtually empty too, so we more or less had the run of the lodge. I’m not sure when peak season is.

The game here however was a lot better than that at Semliki. You’ll see from the photos, we saw more or less everything; lions, elephants, buffalow, hippopotamus, wart hog and dozens of different types of bird. We met up with Hrishi again here (he didn’t come to Semliki because he was working), and drove back to Kakira on the Thursday ready for our flight home early Friday morning.

All in all a splendid holiday/visit. Uganda isn’t for people who want sun, sea, sand and sangria, go to Spain for that. But if you want something a little different, something more adventurous, and if you don’t mind hours of driving over bumpy potholed roads in a 4 wheel drive, then I would recommend it to you. It cost me around £1,500 including pre-holiday vaccinations and Malaria prescriptions (£2.30 a tablet!), but please bear in mind that I had a free week for the first week, so it may well cost you more if you want to go for the same amount of time.