BBC NEWS | Entertainment | Double awards win for Winehouse – okay, let’s ignore the fact that Amy Winehouse, a terrible role model for anyone, clearly isn’t black despite winning two “Mobo” awards, that isn’t the point I wish to make here. What I take issue with is this:

Kanya King, the CEO of the Mobo Awards, read out the names of all of the children under the age of 16 who had been murdered in the UK this year.

“Guns and knives have killed too many of our young people, especially our boys,” she told the hushed audience.

Cry me a river. It’s thanks in part to “music of black origin” that these kids obtain guns and shoot them at each other in the first place. Rap “artists” constantly bang on about their guns and their violence and their money and their “hos”, making obscene videos to accompany their “music” showing them dripping in cash and surrounded by glamorous women and stating that violence and “respect” were the means by which they obtained such trappings. They are hideous role models and it’s frankly small wonder that gun violence is so rife amongst the young black community.

Get your own house in order before making sentimental speeches like that, please.

BBC NEWS | Politics | Lib Dems back migrant ‘amnesty’ – right, so it’s not like the Liberal Democrats are ever going to get into power, so they may as well promise free bubble gum for everyone for all the good it will do them, but this isn’t going to stop me from taking issue with this absurd vote-losing policy.

The Liberal Democrats have said that after ten years of living in the United Kingdom, illegal immigrants should get the right to earn citizenship, which would mean passing language tests, demonstrating a long-term commitment to the UK and having no criminal record. There are two major problems with this that I can see:

This policy is about as well thought out as the other recent infamous Liberal Democrat policy of stating that they will raise income tax. If this wasn’ silly enough, they announced this policy before a general election. It’s little wonder that the Liberal Democrats aren’t in power, nor ever will be. Leftie handwringing idiots. 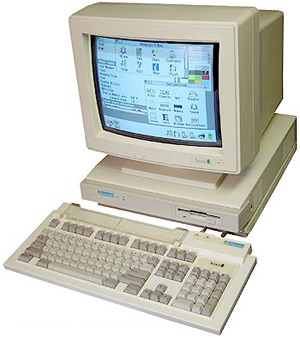 In my younger days I used to own and cut my teeth on several examples of Acorn computer, starting with a BBC Master 128 and ending up with an Archimedes A440/1 which I used up until I went to university, at which point the price of a new Risc PC (the indirect successor to the Archimedes) versus a normal x86 PC forced me, reluctantly, into the PC and Microsoft world. I always remember the computers and the operating system (RISC OS) very fondly and at a couple of points since the millenium I’ve dabbled with second hand examples such as an A5000 and a Risc PC, although I sold both on because I had other priorities at the time.

You can still buy new RISC OS based computers but I can’t justify £800+ on what is essentially a nostalgic toy. So I took a look on Ebay for a suitable example of an Acorn computer that was dead cheap but had sufficient specification for me to indulge in my nostalgia and access all my old data, perhaps even convert it to a modern format. I needed something relatively simple too, as some Risc PCs can get awfully complicated and they don’t age well with their complicated case designs that have parts that can break easily. 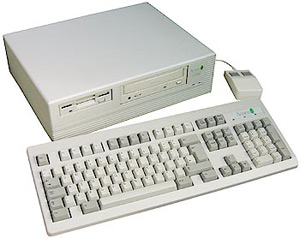 I found an A7000 for thirty quid. It’s the “original” A7000, as opposed to the A7000+, which was an updated version with more onboard memory, a faster processor and I think it had more video memory too. Mine has whatever the original A7000 processor was, 20Mb RAM, 1.2Gb hard disk and a CD-ROM drive. Those specifications may not seem much now, but these RISC machines always made fantastic use of their resources. The hard disk has 78Mb of stuff on it and, to quote the seller, it’s “full of crap”. Once the OS has loaded there’s still 18.5Mb of usable RAM free, and that’s even after the video controller has used some.

I intend to perform a couple of upgrades to it, nonetheless. First it needs a network card for it to be any use to me whatsoever, which isn’t a problem, I’ve just won one on Ebay for £20 or so. I’m also going to replace the CD-ROM drive with a newer, cleaner unit. I don’t need to do this, it’s just a matter of vanity as the existing drive is discoloured and case is otherwise very clean. I also have a stick of RAM from a previous Risc PC that I owned briefly which will take the RAM to 36Mb, not that it needs that much, but I might as well have it if I have the part lying around. Finally, I’m going to see if I can upgrade RISC OS from 3.6 to 4.something. RISC OS 4 is the development from RISC OS 3 that was completed and taken to market by a company other than Acorn after Acorn dramatically decided to stop making their fine computers in 1998 in favour of set-top boxes.

The A7000 is a “cut down” version of the Risc PC, designed for and marketed to schools and other buyers who could not afford the relatively expensive Risc PC. The Risc PC is a larger machine with much better upgrade options and less integrated components, making them easier to upgrade. I do however prefer the A7000 as it’s much smaller and neater and I don’t really need the upgrade path that the Risc PC offers. I don’t need special expansion cards nor do I need further internal drives. A bit more video memory might not go amiss though, and in that regard if the opportunity to replace it with an A7000+ came along I probably would go for it. 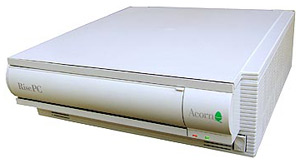 The ultimate Acorn RISC machine would be the Risc PC StrongArm J233, which was the last production machine they made before they stopped making computers. This machine is very rare as it was massively expensive and was only produced for a short time. Acorn were going to make a successor to the Risc PC called the Phoebe, which was going to have an amazing specification and would run RISC OS 4. They even got to the stage of taking pre-orders but then dramatically cancelled it at the last minute, selling the rights to RISC OS to another firm who continued to develop it. They’ve since gone bust completely. It’s a real shame because they were such an innovative company that made splendid computers; they deserved better.

If you’re interested in the history of Acorn and their various products then I’ve found a couple of very interesting websites that cover it in some depth. One of them is written by a guy who intends to collect as many examples of Acorn computers as he can. I’d love to be able to do that but I fear that I would be made to live in the garage, along with the collection itself.

Found a fascinating website the other day called Fictitious Liveries which is run by a very talented photoshopper who’s into his trains and likes to imagine how certain rail vehicles might look in various parallel universes. Of particular note:

Ironically enough, Stagecoach have won the franchise to run the former Midland Mainline and parts of the former Central Trains franchise from November, which they will operate under the brand East Midlands Trains, with branding very similar to that of their existing South West Trains franchise. Although they don’t get any Pendolinos with that franchise, the Pendolino mockup is startling accurate when compared to their own mockup of how their Class 222s will look. They’ll also get some HSTs, so it’ll be interesting to see how similar they’ll look to the HST mockup.