I’ve been working on the next stage of the IT and AV installation job I’m doing at a friend’s house in Eccles this week. It’s second fix now which means the plastering, tiling and (most of) the painting and decorating has been done, so the job this week was to attach 69 CAT6 sockets to the CAT6 runs pulled through the house and solder all the home cinema faceplates on the speaker cables that we ran through the walls (all 10 of them). Fiddly jobs in places, but no major snags or hiccups, so far at least. When we come to test each and every cable will of course tell us whether we don’t just believe that we’ve done a good job! 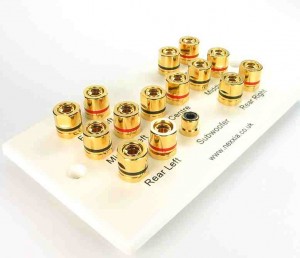 All but two of the speaker cables terminate on this one plate, which all has to be soldered.

The next and final stage before equipment install (i.e. the final infrastructure installation stage will take place in a few weeks once the builders have finished the basement, where all the cables terminate and the equipment rack will be situated. Although I have all the bits we need to finish this I can’t do it because the basement to the house is not yet secure. Once the walls are finished and the external doors to the basement are fitted I can move the equipment in and finish it. Then it’ll be the big test.

There are also 12 runs of CAT6 that I’ve not yet been able to do anything with simply because the walls on which they will sit haven’t yet been built, so I’ve just run the cables to the ceiling or floor at the point at which they will eventually be and left sufficient length coiled up ready. Part of that was lifting up huge slabs of concrete out of the floor in the new kitchen which, with hindsight, would have been better done wearing a pair of gloves.

Once it’s all done my “client” can then think about home cinema and computer networking equipment. Right now he just wants to concentrate on getting the builders finished and out so that he can move back in again. I hope he doesn’t think that he “over-egged” the installation. Certainly, a 69 run CAT6 structured cabling system is definitely on the upper end of what you would normally put into a house, even of that size, and he may not even be able to buy a Dolby 9.1 home cinema system for a while. The point is that the infrastructure will make the house very future-proofed, which is what he wanted.