IT and AV installation job at Salford property

For the past week or so I’ve been working on an IT and AV installation job at a friend’s house in Salford. It’s a large Victorian house which he bought and is in the process of having it gutted and extended.

As part of this he wanted a fully integrated IT, telecoms, TV and and audio system installation, which he’s asked myself and Chris to do since we’ve some considerable experience with such things. He knows nothing about such things since he’s a GP, and so is trusting our judgement on what to install and buy. I hope he doesn’t regret doing so!

Phase 1 is first fix, so basically the hard work of pulling 80 runs of CAT6 and loudspeaker cable through the house (67 runs of CAT6 and 13 runs of speaker cable, including outdoor cables to the gardens). Once this is complete (on Thursday) we then have to wait for the builders to finish ready for second fix (where the cables are connected to sockets and patch panels). This forms Phase 2.

Phase 3 then becomes the really fun bit where we install all the specified equipment, including a computer network, a 9.1 speaker home cinema system, a distributed satellite TV system, a zoned audio system and other smaller features. After that comes the housewarming party where our friend gets to impress everyone with our work :)

It’s a manual job but it’s a fun job and it’s something I’ve done many times before so I don’t mind doing it. It’s not every day someone asks for a structured cabling system in their house, let alone on the scale of this one. Luckily, since it’s an old house, it has a cellar and lots of voids through which cables can be run. Ironically newer houses are harder to retrofit in this way unless it’s done at initial first fix because they simply don’t have such spaces, usually in the name of cost saving and profit maximisation on the part of the developers.

Here are a few geeky pictures of Phase 1. Apologies for the poor quality, they’re iPhone pictures. I’ll replace them with nicer ones if I remember to take any. 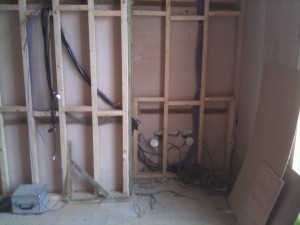 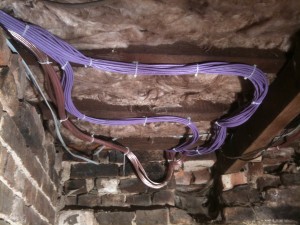 Many of the cables run through the cellar 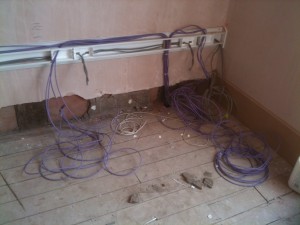 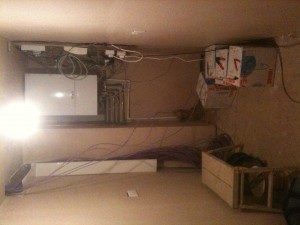 Plant room in basement, where cables will terminate in a rack (image helpfully rotated by WordPress)