No to the Alternative Vote 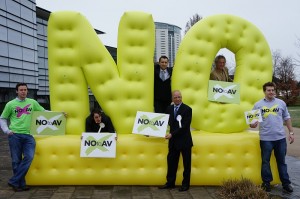 On Thursday 5th May there is a referendum on whether or not the United Kingdom should adopt the instant-runoff (“Alternative Vote”) voting system in place of the “First Past The Post” (FPTP) system that’s currently in use. There are rigorous campaigns for and against this, both from various political parties and from other campaign groups.

Having carefully considered each argument I’ve come to a decision on how to vote on 5th May and I wil be voting “No”. Here are the reasons why I have reached this decision. You may wish to note that none of these reasons are political. I don’t care about any of the party positions. I will admit that the party that I’m a card-carrying member of has a consolidated “no” position, but this had no bearing on my decision.

I’m not saying for a minute that the existing FPTP system is by any means perfect, because it’s far from it. Indeed, I’ve often bemoaned its shortcomings following various general elections after watching in dismay as carefully planned constituency boundaries deliver election victories which they ought not to have and wouldn’t have under a “fairer” system. I just don’t think that AV is the answer to this.

So there it is, I have imparted my decision and the reasons for it. If you’re undecided at this stage I hope that the points I’ve raised help you to decide appropriately.