People who know me well will know that I’m not normally a football fan but that I do watch the pertinent games in the World Cup every four years. That is, games with England in them and then probably the semi finals and definitely the final, whether England are in them or not (and they invariably aren’t). At a push I’ll also watch the European Championships but I’ll usually have to have absolutely nothing better to do.

So what do I think of this year’s tournament and England’s campaign? Let’s start off with some quick recaps of the qualifying games that England played: 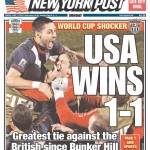 It was a poor start for England as they drew 2 – 2 against the United States, although the USA claims to have “won” the match (see left), apparently because they don’t know the difference between a win and a draw. I should also point out that the United States also lost the Battle of Bunker Hill, incidentally (a pyrrhic victory for the British, but nonetheless not a defeat). Unimpressed, the fans believed that it could only get better after what was seen as a false start.

But no. In true British style the England team managed to make a bad situation even worse by delivering another draw, except this time it was without any goals at all (and therefore no points), with Algeria of all opponents. Algeria, incidentally, lost seven out of their last eight games (the eight was the draw with England). It was a dismal, piss poor performance from what is supposed to be a world-class team made up of incredibly well paid world-class premier league players. Still at least they didn’t actually lose the match, eh?

This match meant that we scraped through to the last 16, and whilst it was the result that we needed, it was hardly an amazing performance and certainly not the goal count that England should have delivered after 90 minutes with Slovenia. Had we drawn this game like we did the previous two games then our progression would have been decided by another game. Had we lost it we’d have been out of the tournament with no question. A net profit of one goal between three games in the qualifiers from what’s supposed to be a world-class team is a little bit poor, frankly, even if it is all we needed to get through. It doesn’t bode well for the last 16, let alone the finals should we make it that far.

We’re through to the last 16, which is the important thing, but England really need to up their game if they are to get any further. Each subsequent game in the World Cup only gets more difficult with increased pressure. This increases exponentially if and when the finals are reached. Don’t get me wrong, I have every hope that England will succeed in this tournament, but I’m definitely not getting my hopes up at this stage. Every time England reach the finals in these tournaments it’s always seen as lucky and a fluke, and our hopes are always ultimately dashed. I’m afraid that I’ve no evidence to suggest that it’s going to be any different this year based on performance so far.

Since there’s going to be more to come from England during this tournament I will either update this blog or follow it up with another one as and when there’s something to report and comment on. Since writing this blog it transpires that we’ll be playing Germany on Sunday, so if past tournaments and games against Germany are anything to go by our chances aren’t all that great.

Now I’m going to re-hash a long-standing rant that I’ve talked about before on this blog a number of times over the years. I think footballer players’ wages should be performance-related, like many normals jobs are. I believe that rather automatically receiving these giant sums of money each week regardless of how well football players perform during games, players should receive a basic salary (say £25,000 per year) and then a bonus for each goal. These bonuses can be huge (within reason), I don’t care, but players on a team should only receive them if if they score goals. I’ve no problem with people earning lots of money for being good at their job, but I just don’t believe that anybody should be paid if they do not do their job properly. Not winning a football game to me suggests that the players aren’t doing their jobs properly, it’s as simple as that. If I did my job badly or incorrectly I certainly wouldn’t expect to be paid for it, why should it be any different for footballers, especially given the frankly excessive levels of wage they are paid?

Update 27/06/2010 – England 4 -1 Germany: They think it’s all over, it is now! An absolutely shocking performance from England against Germany (4-1) means that we’re now out of this year’s tournament, the disallowed goal notwithstanding (FIFA really need to get their head around this whole “modern technology” thing; horse racing and many other sports have been using it for decades). It is, apparently, the worst performance by England in the history of the World Cup. One would hope that it could only get better from here in future tournaments, but I’m frankly not holding out much hope. Tomorrow the air will be filled with the stench of burnt polyester England flags on barbecues and the country will be back to normal. Thank heaven for that.

Finally, I’ve resurrected this from an ancient blog that I posted during the 2002 World Cup because I still think that it’s funny: