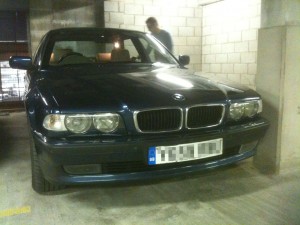 Front view in the car park at home

I’ve got a new set of wheels after not having my own car for two and a half years ever since I gave my BMW 320d back. It’s a 2001 BMW 735i Sport (E38), one lady owner, and it’s lovely. I’ve always wanted an E38 and what with them getting a bit long in the tooth with the introduction of two new 7 series ranges since they stopped making the in 2001 I thought it important to scratch this particular itch before they became unfeasible to own as daily drives.

It’s nine years old (last of line 2001 model) and has 139,000 miles on the clock. It’s in good working order with nothing fundamentally wrong with it, however, due to its age and mileage there are a few things that it needs doing to it, including (but not limited to):

At some point down the line I also intend to replace the speaker system and satellite navigation system, but they are large projects requiring a reasonable amount of money so they will have to wait for a while.

There’s a wealth of E38 geeks on the Internet who have become E38 oracles over the years so I won’t be short of help and information as and when I need it. It’s been some years since I owned a car that I can treat as a “project” car, i.e. not a car that to do anything do would invalidate the warranty. The last car I had like this was my old blue Sierra, ever since then I’ve had new cars or cars that were still within their warranty period.

A few pictures (more to come once it’s had a full spit and polish, it’s a little dirty at the moment as the previous owner was still using it up until the day we bought it): 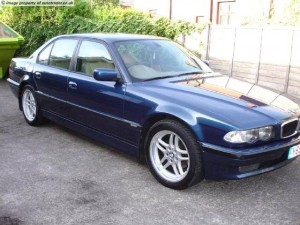 Side view as shown on Autotrader 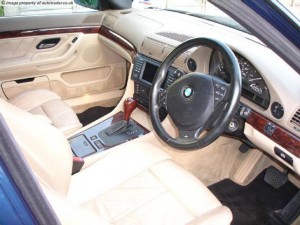 Interior as shown on Autotrader